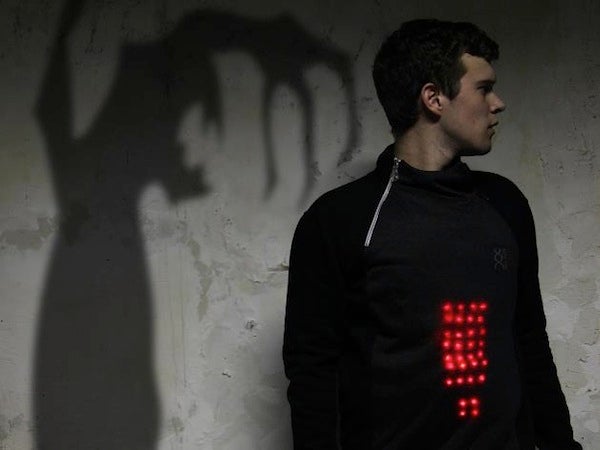 Two graduates form the Utrecht School of Arts have created a wearable game console, with electronics and LEDs woven into the fabric.

Christiaan Ribbens and Patrick Kersten are two recent graduates from the Utrecht School of Arts in the Netherlands, and they've created a new game console. Their creation, "Woven", consists of (among others) Bluetooth modules, motion sensors, speakers, shake motors and LEDs which have been woven into a pair of jeans and a sweater. Three Arduino microcontrollers keep the system running.

Wearable technology is becoming more and more popular these days, and Woven has proven itself among it's peers by being quite diverse. Though originally built as a gaming console, Ribbens and Kersten discovered a number of alternate uses for it during development: They discovered it could be used to monitor the health of the user, alert the wearer of their social media updates, or quite simply, it could function as cool looking clothing with LEDs built in.

It's first and primary use as a game console is quite interesting by itself though. The developers have created a game called spooky, in which you attempt to fight ghosts and phantoms which attack you at random. The game is played by connecting a smartphone to Woven via Bluetooth and connecting the speakers to the headphone jack on said phone. The LEDs will display a 12×12 inch broadcast of the game's progress to onlookers. The idea of using your entire body to play, much like a connect, but augmented into the real world, is an interesting concept.

Oh and did we mention? It's washable.

Medal of Honor update rolling out

An update is rolling out for Medal of Honor: Warfighter, partially due to player feedback and partially in preparation for...