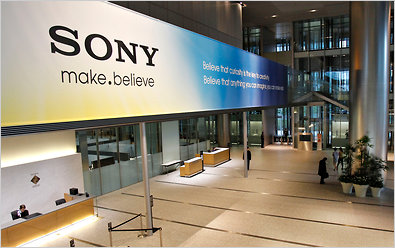 After some troubling times for Sony and Sharp, the two technology giants are taking drastic steps to cut costs and are refocusing their businesses to get back to turning a profit.

Sony has been losing money for a while now, and last year, they reported a loss of 1.6 billion yen (20 million USD), but this year, it is expected they'll manage an operating profit of nearly 33.8 billion yen (425 million USD). Still, Sony is not out of the water yet; that profit is somewhat inflated and the company is still cutting costs at every corner.

Currently, Sony's stocks have dropped in value by 16% since mid-June and is currently valued collectively at 12 billion USD. Sony's five year cost for ensuring against debt default, the so called credit default swap, has jumped up by 60%. Much of the sudden profit comes from the recent selling of their chemicals unit for 58 billion yen and the closing of their Shinagawa Technology Center, a 31-story Tokyo commercial building. There's also talks of closing the Sony tower in New York. In addition, the company is expected to lay off 10,000 employees before March.

These sudden changes come after the new Sony CEO, Kazou Hirai, took over in April. He's making some drastic changes to the company, including shifting focus to gaming, mobile devices and digital photography, as well as emerging new technologies such as medical imaging. It will subsequently be moving away from televisions, which has given Sony a 9 billion USD loss over the past eight years. "The areas in which Sony is continuing to focus are of course high-risk, high-return markets," said JP Morgan analyst Yoshiharu Izumi.

Meanwhile, Sharp is also taking steps to cut costs and boost profits, and for them, the situation is even more dire. They recently received a 4.6 billion USD bank bailout, and has pledged to cut, like Sony, around 10,000 jobs, and sell assets. After adding restructuring, and with loss of valuation losses on stocks for LCD displays, they expect a loss of 400 billion yen between April and September, nearly double of what they had predicted.

To boost profits, Sharp is increasing production of their new HD power-saving IGZO screens, which they hope to sell to laptop manufacturers, such as Lenovo and HP. They are expecting a much milder, yet still substantial loss of 50.4 billion yen, for their second quarter. However, it is expected that the charges incurred in the April-September period, frees the company up to pursue profits, and puts it in a better position to bounce back.

Developers that are looking into taking a chance on Windows 8 will be happy to know that Microsoft has managed...