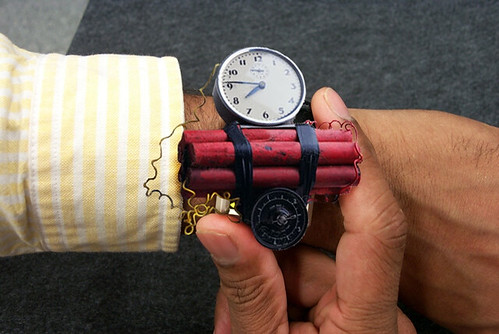 An artist traveling from Oakland airport, California, was arrested for having a suspicious looking watch which looked like a bomb detonator, however the device turned out to be an art project.

Geoffrey McGann, an artist traveling out of Oakland airport in California, was arrested Friday while trying to get through airport security. The reason for his arrest was a decorative watch he was wearing, which had cables and switches coming out of it. The security personnel at the airport noticed the watch and identified it as a possible device for detonating a bomb. McGann stated that the watch was just a watch, decorated unusually as an art project, but that it was not a detonator. A bomb squad was called in and the airport was swept. Unsurprisingly, there were no explosives in the watch. McGann was also wearing suspicious boots, which were unusually large and filled with insoles.

McGann was taken into custody and moved to Santa Rita Jail in Dublin, where he is still being held on charges of possessing materials to make an explosive device, according to the local Sheriff's department. This sounds like a nonsense charge, and perhaps the most obvious reason McGann is innocent is that nobody with an actual bomb would likely wear the detonator on his wrist, visible for all to see. This of course brings up the point that Mr. McGann doesn't seem very clever: You simply do not go into an airport with stuffed boots and wires coming out of your watch.

In a recent research paper from Fuji Film, the company stated they are working on a new recording method in...