An unlucky owner of Nintendo's brand new revolutionary console now possesses an expensive brick because they accidentally turned it off during the two-hour system update.

A recent NeoGAF forum thread reveals what happens when a Wii U is turned off during its two hour startup system update: it bricks, becoming totally useless. Nintendo's brand new console retails at around $300, making it quite a frustrating ordeal if your console bricks.

Just about every owner of electronics–which is pretty much most of us–knows not to turn off or remove a device's battery during an important software or system update. The same is true for when saving or copying data to an external HDD or memory card, and if removed, the data itself is corrupted and unusable. 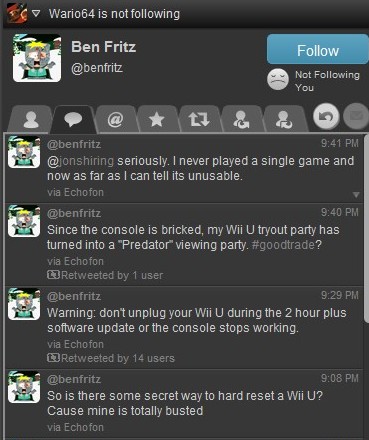 However obvious and unsurprising it may be, accidents happen, and it can be quite daunting to destroy your brand new revolutionary gaming console right off the bat…so be forewarned and never turn off your Wii U when it's updating!

Nintendo's Wii U console is now available at just about every electronics retailer in Basic ($299) and Deluxe ($349) editions. For more information on the Wii U system, please visit Nintendo's official website.

China to officially end game console sales ban, Xbox One vs PS4 all over again

I Dream of Geanee: A DLP projector that works with your iPhone

Ever wish you had a projector that fit in the palm of your hand? Well electronics maker Geanee will be...