In 1991, the mummified remains of a 5,300 year old man was found in the Alps. Previously this year, the mummy's remains were genetically mapped, and now, there's been an update to the findings.

Ötzi the iceman is the mummified corpse of a neolithic man found in the Austrian alps who died some 5300 years ago. When discovered in 1991, he became the oldest murder case in the world, as it was revealed that he had been shot with an arrow and left to bleed out on the mountain. Today, the mummy resides in the South Tyrol Museum of Archeology in Italy. Ötzi's genes were recently analyzed to help determine his heritage and it was found that he was Sardinian, a surprising finding. 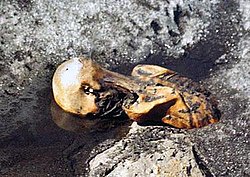 Ötzi, shortly after being discovered

It was confusing that a Sardinian, coming from a quite isolated area at the time, would have found his way to a glacier in the alps. It's assumed that prehistoric people didn't move around nearly as much as modern day humans. It would have taken a considerable amount of effort, for seemingly no reason, to move hundreds of kilometers to Austria. In order to find an explanation for this, the genetic makeup of Ötzi was further investigated. The entire DNA sequence had not been analyzed previously, and now, it was compared not only to modern day Humans, but to the remains of other prehistoric people as well.

He has seen better days.

The findings revealed something quite interesting: Though Ötzi does most closely genetically resemble modern day Sardinians, the result is quite different when compared to ancient humans. Among his peers, he is much closer linked to northern Europeans, such as Swedes, and also Bulgarian farmers of the time. The findings support the notion of a mass migration from the Middle East towards northern Europe, which brought farming to the continent.

2,500 educators turn to Portal 2 for teaching

Valve's physics-based puzzle game Portal 2 is being used by teachers across the United States in order to educate their...