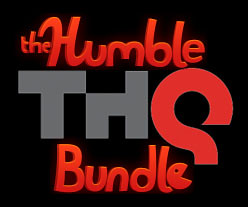 The Humble THQ Bundle is a big hit, and the for-charity sale is already approaching $4 million in sales with more than five days left to go.

The Humble Bundles are a series of pay-what-you want game collections which go on sale on a semi-regular basis. The Humble THQ Bundle has been on sale since November 29, and let's you pick a price, from $1 dollar and up, for a games and soundtrack collection worth a total of $210. What's more, you get to choose what to do with the money you paid. You can send it to charities, such as the American Red Cross and Child's Play charity, to THQ (they kinda need it too) or the Humble Bundle organization.

So far, more than 692,000 bundles have been purchased at a total of $3.8 million. The games included in the bundle are Red Faction Armageddon, Darksiders, Metro 2033 and Company of Heroes (including it's two DLC packs). If you pay more than the average, which is currently $5.61, you'll also receive Titan Quest and Saints Row: The Third. The sale ends on December 12, so you still have plenty of time to chip in – and remember, the gift of giving is the best gift of all, so don't be too cheap.

Google is giving $5 million to the World Wildlife Fund to put drones in the skies over Africa and Asia...