Appearing as if it comes from a steam-punk horror movie, the Euphonia is one of the strangest machines you’ve likely ever seen. 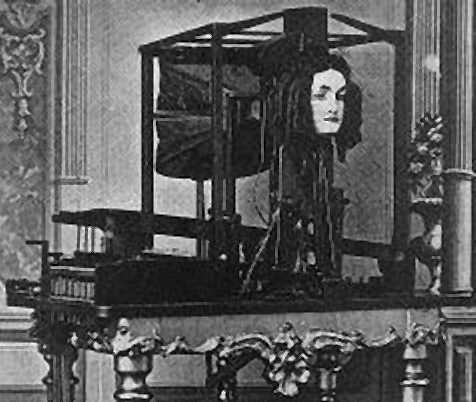 Featuring the disembodied head of a woman and speaking in a gloomy, dismal voice, the Euphomia was the most advanced talking machine of the 19th century, and has links to the invention of the telephone itself. Euphomia was constructed by Joseph Faber, a German immigrant to the United States. The machine was displayed in 1845 at the Music Fund Hall in Philadelphia, to the admiration of Faber’s fans.

Among those fans was Joseph Henry, whose electromagnetic relay invention laid the groundwork for the telegraph. Henry was also an early supporter of Alexander Graham Bell, the inventor of the telephone. All these people admiring each other indicates that Faber was at the forefront of telecommunications at the time, and Faber in particular greatly advanced the talking machine.

Euphonia used 16 keys that played notes corresponding to common vocal sounds in European languages. It did this through movements of the jaw, lips, tongue and vocal chords. A 17th key worked Euphonia’s glottis. With a skilled operator, it was said that Euphonia could speak in several languages, and even sing “God save the Queen”.

Henry was deeply impressed by Euphonia, and Faber subsequently followed PT Barnum to London to display the device. Lacking showmanship however, Faber failed to promote the device, and it ended up as more of a curiosity than a scientific breakthrough. Still, it did find one more prolific supporter: Alexander Melville Bell, Graham Bell’s father.

This day in history: Inventor of the mouse Douglas Engelbart was born

This week in history: Microsoft versus the world

A shifting glacier has revealed the wreckage and remains of a cargo plane that crashed near Mount Gannet, Alaska.