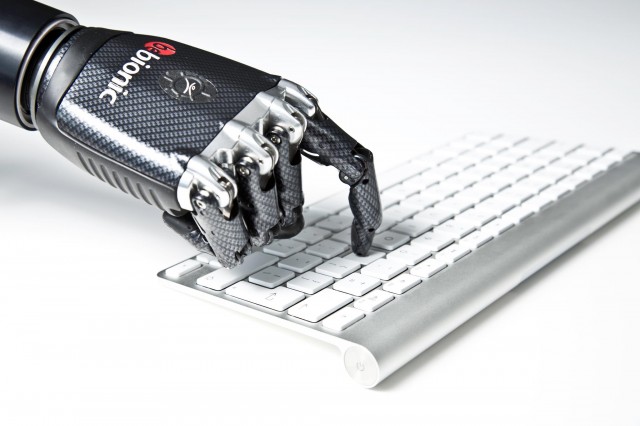 British prosthetic firm RSLSteeper latest creation, the BeBionic 3 prosthetic hand, looks like something from a sci-fi movie, and has some impressive capabilities.

The British company RSLSteeper has been developing prosthetic limbs for a few years now, and their latest creation, the BeBionic 3, is quite impressive. The prosthetic is a mechanical hand made from light weight carbon fiber with aluminum and alloy knuckles. Thanks to the design, it's light enough to be worn without much strain, however, where it really excels is in it's function. It is strong enough to grip a book, yet delicate enough to grab an egg.

The hand is controlled by the contraction of two muscles in the forearm, to which sensors are attached via a forearm sleeve. When one muscle tenses, the tiny bioelectrical signal which is produced, is picked up by the hand's sensor. The sensor then amplifies the signal and send the signal to the hand, which closes. When the other muscle tenses, a signal is similarly sent for the hand to open. If both muscles are tensed, then the hand switches from it's gripping mode to it's wrist rotation mode. Thus, the hand doesn't function naturally in the same way a real hand does, but it is operated through muscles in the arm, and learning to use it intuitively sounds like a fairly easy process. 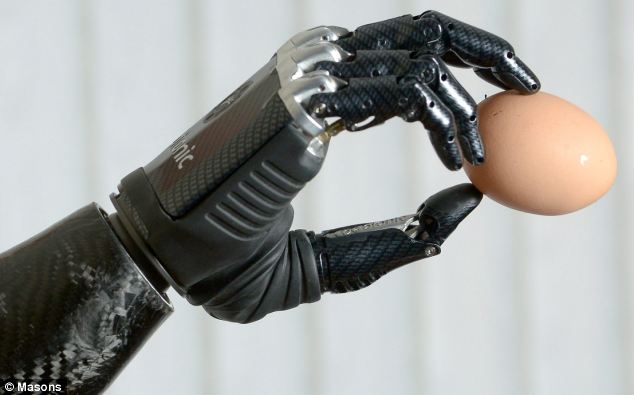 Seeing how it looks now, imagine how cool these things will be in a few years…

What sets the hand apart from other prosthetics though, according to Richard Shapcott, general manager of the US branch of the company, SteeperUSA, is that the digits can be operated individually. Most prosthetics simply have a gripping function where the entire hand can be closed or opened. The BeBionic 3 however, has a motor for each finger, meaning it can perform delicate operations, such as clicking a mouse or gripping a pencil. Esthetically, it also makes the hand look more natural. The hand comes preset with eight different grips, some of which involve manually rotating the thumb with the other hand. BeBionic 3 comes with software that lets you modify the grips though, adding your own or refining the existing ones.

Since September, roughly 30-50 people have been outfitted with the prosthetic. One of these people is Nigel Ackland, who lost his hand six years ago. Below is a video where he demonstrates some of the hand's capabilities.

Vuzix says its Smart Glasses will beat Google to market

Scientists develop face paint that can resist heat from bombs

Simon Cowell and Will.i.am to launch X Factor to find next Bill Gates

Android and iOS will have Microsoft Office in 2013

There are quite a few good office suites available for iOS and Android, but when Microsoft wants to shove its...